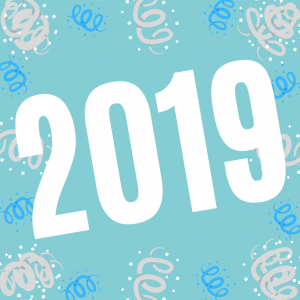 I started 2019 by telling myself I would get up early and do all of my work each day in a routine. Naturally, I had all the best intentions in the world. And, somewhat unsurprisingly, it didn’t last long at all. Later, I would discover that the problems I’ve always had with sleep and fatigue were actual medical conditions, but I’m getting ahead of myself.

In February, my husband and I celebrated our second wedding anniversary and in March I turned thirty.

April saw me finishing the first draft of my second novel, as funded by the Arts Council of Northern Ireland.

I also cut way back on my voluntary work (again) and ‘Kon Mari’-ed our house.

July was CampNaNoWriMo, in which I wrote 25,000 words, and most of August, for me, was spent editing a novel for a client. Then, in September, I finally – at long, long last – went back to school (/college) and started studying again.

Oh, and I also wrote a children’s picture book in there somewhere, but I will come back and talk about writerly things in a separate post.

In October, I returned to Dublin for DeptCon5: Ireland’s Biggest Young Adult Convention, which was a super fun (if somewhat tiring) weekend. THEN, at the very start of November, I was off to England for SCBWI’s 2019 conference. Coming back from that, I got stuck into NaNoWriMo proper.

I was sick for a week before the England trip and for about a week after. Then I was sick for two days around the middle of the month. And, finally, as December hit and we headed towards Christmas: lo and behold, I got sick again.

It’s fair to say things have been manic, but they’re kind of always manic. It’s the nature of life. Or, at least, my life. (Click here to read my review of 2018, for comparison, if you want.)

What do I hope for 2020? Well… wait and see. I have a separate post on that very topic planned, too 🙂

Thank you to everyone who’s been following me along so far!