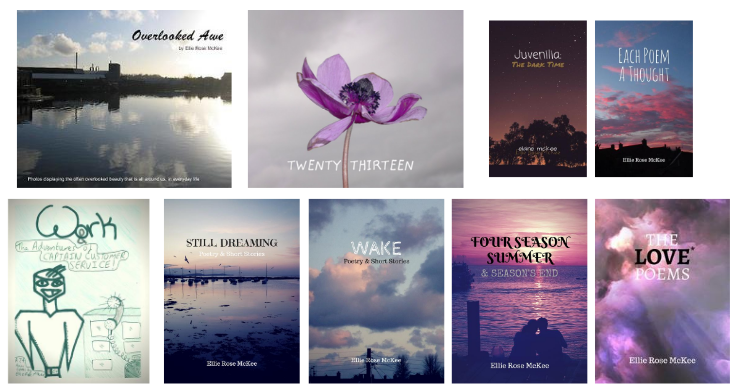 I’ve been thinking again about my past projects (pictured above), now have a bit of distance from them. They haven’t been out in the world for a while – I unpublished them over a year ago – and, in fact, one of them never even made it out to begin with. I killed my micro-poetry project before it ever really saw the light of day.

But anyway, I’m thinking about it because… because I’m kind of itching to start something new.

I don’t know if anyone has been able to tell, but I’ve been finding it hard to blog, recently. Hard to motivate myself to do it. The words you’re reading now are the first ones I’ve written this month. Maybe I’ve lost momentum. Maybe I’m burned out. Maybe both?

Either way, I think I need a break. Which is funny, actually, because I’m not sure if I know what one looks like. A lot of the time, a break for me just means switching gears to do something else rather than stopping entirely. And it’s kind of the same here. I don’t want to stop entirely so much as I… well. This might sound weird, but I want to draw.

I’m not actually good at drawing, but I want to learn. I want to try.

I actually think I want to try Inktober, and I’m itching to put together a somewhat rough and ready zine from what I create.

…reading back over that last sentence, I am relieved that I still want to create. Maybe it means everything isn’t so bad as it feels right now.

I don’t know when I’ll blog again, but words will most certainly return in some way at some point. Maybe it’ll be in a month. Maybe it’ll be a few hours and I’ll then feel silly for having written this. Regardless, I’m gonna doodle in the meantime.

A zine is a fun idea, but I’m playing with it as just that; not committing myself to anything just yet.

I have mixed feelings about putting another thing out into the world, because of the aforementioned past projects. They all took so much time and energy (some more so than others) but, ultimately, I was unsatisfied with them. My standards kept rising and the books kept falling short.

No wonder I’m a little gun-shy.

…I’m not really sure where I’m going with all this. Maybe that’s my point.