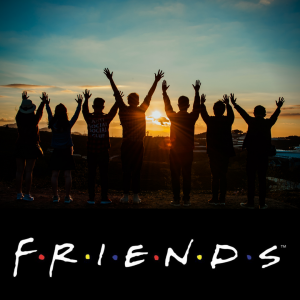 This is, in part, a follow up to my blog post ‘On Adulthood.’ I’ve just reread it in preparation to write this and, wow, what a difference a couple of months can make.

On the first of March I said, and I quote, “My mental health is the best it’s maybe ever been… for right now, I’m okay.”

And then, of course, the world fell apart. Not just my world, but THE world. And I, like many others, am not okay. Far bloody from it.

But what has this got to do with friendship, you ask? Well, in that first post I talked a little about ‘Friends’ the TV show, and how I was relating that to my life.

I now want to do that again, because I’ve had some follow up thoughts. On both the show and reality.

I finished binge-watching episodes maybe two weeks ago. And where it had started out as a fun pastime, it kind of ended up as just another thing I wanted to power through and finish. I wouldn’t go so far as to say it was taxing, in the end, but I definitely kept hitting up against some problems again and again (and again).

For example, despite being set in the extremely multicultural city of New York, did you know that Friends didn’t start consistently having black background characters until season seven? It took the show SEVEN years to make the token gesture of putting one or two people of colour in the background of each episode.

What’s more, there is so much anti-LGBT sentiment. By the end, there wasn’t a single episode that didn’t have being gay (or trans) as a punchline. And there were so many fat jokes for a show where every single character is skinny!

You might wonder why I even bothered to finish it if these things were bothering me so much, and here is the crux of the matter: you can both love and be bothered by the same thing at the same time.

Our experiences of things are rarely binary, where we either entirely adore it or cannot find a single thing to like. With everything, there is nuance. And that can be okay – because it is the intrinsic nature of things, it has to be okay – for the most part, but you need to draw the line for when it’s not okay. For when the bad outweighs the good and it’s time to give up and walk away.

If Friends had still been airing when I was making my way through the seasons, I may well have stopped watching. But since it had ended, and the end was a definitive thing that I was not far off, I decided to stick with it.

Recently, however, I decided I could no longer stick with a real-life friendship. Like the show, and like all of us, this person had good points and bad points. But my breaking point came when those bad things – like their sharing of harmful conspiracies and racist lies – became frequent enough that I couldn’t put up with it anymore. I challenged my friend, but they wouldn’t listen. They’d been poisoned by the same kind of crap they were sharing.

So, I broke it off. I unfriended them. And I walked away.

Sometimes things change – people change – and sometimes that’s for the better and sometimes it’s not, but sooner or later you will come to a line in the sand, and you gotta decide which side of it you want to be on.

It can be sad letting people go, but what’s the point continuing to share my life with people if I can’t live with myself? But that almost wasn’t the case.  END_OF_DOCUMENT_TOKEN_TO_BE_REPLACED