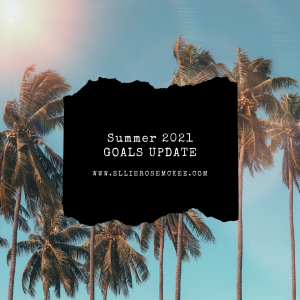 I’ve been racking my brain for a way to summarise how I’ve found this year so far, and to give an account of all the ways I have (or haven’t) worked towards the goals I set out at the end of 2020.

I know that January, February, and March were frantic with rewrites and formatting and marketing for the release of Full Term.

I know April was Camp NaNoWriMo, and I’d previously said I wasn’t taking part as I didn’t think I had it in me. I was decompressing after the first quarter. But then I went ahead and did it anyway, albeit with a small (10k) goal.

If you’re to ask me how I reached that goal, or what I did in May or June… Well, I have the stats right in front of me, which I’ll get into in a second, but honestly? Everything mostly happened in a fog. I have an all too familiar sense that I’ve been very busy but also that I haven’t much to show for it, which is subjective at best and an outright lie at worst.

So, since that is the case, and my own thoughts and feelings are not the best barometer for measuring success, I will lay out these past six months in cold hard facts.

Books read so far: twelve (and I’m in the middle of three more).

I set out to write a minimum of two blog posts per month, make at least two poetry and two short story submissions per month, and it’s these goals that have been the most hit and miss depending on whatever else I’ve had going on in said months.

My study goal was to complete my Masterclass subscription, which I did. (You can find my thoughts on that summed up here.)

I aimed to put out three newsletters this year, and I’ve done one so far and am planning the second for mid-July, so that’s on track.

I wanted to finish writing three fanfic works in progress, and I’m in the middle of that right now.

Still to come this year is finishing the third Belfast Writers’ Group anthology, finish books two and three in the Family Ties Trilogy, and publish a different book, which I’ve teased but haven’t officially announced yet.

I guess you could say things are more or less going to plan. As is often my takeaway from these kinds of posts, I think I need to not be so hard on myself. I may not have written as much as I’ve wanted, but what I want is often unrealistic, and I have done a lot.

Let me know in the comments section how you’re getting on, reader. If you set any goals, how are they doing? And more importantly, how are you doing? As much as my brain tries to convince me otherwise, goals are not the be-all and end-all of everything.