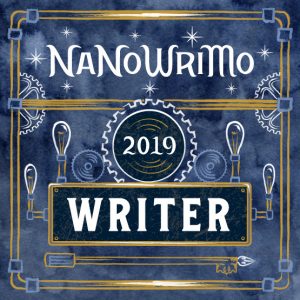 So, NaNoWriMo is over for another year.

In the run-up to November, I honestly didn’t know if I was going to take part. I’ve consistently attempted NaNo for several years, and I wanted to try again this year, but I didn’t know if it was possible with everything else going on.

To begin with, I was starting the month in England for the annual SCBWI Conference, and I wouldn’t have my laptop with me. (There would have been no point, I didn’t have a spare minute for the whole three days.) I was also trying to keep up with my studies. But, despite this, I decided to go for it in the end anyway. I wasn’t really expecting to hit the 50,000-word goal, but I wanted to write as much as possible.

I signed up –– and then promptly got sick. (Typical, right?)

Even so, I managed 21,000 words total across thirty days.

Going in, I thought I’d be mainly working on one project (Death Girl) but, as you can see, I actually ended up mostly writing fanfic. I’m okay with that. Given the craziness of the month, I’m happy with how I did.

Going forward, I thought some of you might be wondering what works-in-progress I have left after recently abandoning a bunch. So, here’s the breakdown of that:

Right at the top of my list is the fanfiction I was writing in November. Originally started in October, it’s now at 24,000 words and I expect it will be done at 30k. I aim to have those final six-thousand words done by Christmas.

My two main projects for the first half of 2020 are the third book in my trilogy (which I will be working on during CampNaNoWriMo in April) and a draft of Death Girl (now scheduled for CampNaNo in July). I also want to finish three short stories: Prepared, The Change, and Wingman.

What writing projects are you in the middle of, dear reader? Please tell me in a comment below. 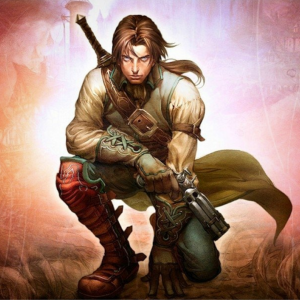 Recently, I have been reminded of those times playing Fable as I work on book two in my trilogy, tapping on keys to hit a specific word count each and every night in a row. END_OF_DOCUMENT_TOKEN_TO_BE_REPLACED

Two days before the end of NaNoWriMo in November, I had ten thousand words still to write. So I thought to myself, I’m probably not going to be able to do it, I might as well not bother trying.

I probably don’t need to tell you that that’s a terrible attitude. I knew it myself even as I thought it, but that didn’t make giving up any less tempting.

So I went to a few friends and asked them for a pep talk. They waved their virtual pompoms, I wrote the ten thousand words, and the rest is history. I have another NaNoWriMo win under my belt, and that win had me riding high on good feels for good while.

Way back at the start of 2017, I wrote a blog post that stemmed from a lot of frustration with myself. I put on too much pressure, and I buckle, and I don’t finish a lot of projects (not compared to the number I start, anyway). But that’s only half the story, because you know what else I do? I get up and I try again.

Today has been a crappy day. The course I was supposed to start teaching tonight was cancelled for lack of people signed up. I turned down client work, because I wasn’t up to it. I cancelled an event; deleted my Patreon. Then I had a nap, and I started writing again.

I’m currently behind on my CampNaNo word count, but I’m still going. Tomorrow is a new day.