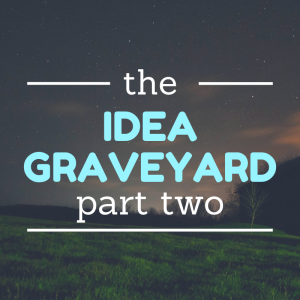 I get a lot of story ideas. In the past, I’ve talked about how I deal with them all: metaphorically, by making them queue up and wait their turn, and practically via the use of lists and spreadsheets. But even with this mindset and those tools, it can still be a lot to manage. Sometimes – and it breaks my heart to say this – it is best to just let an idea go.

I was greedy for a long time, so obsessed with fears of ‘the one that got away’, that I tried to not give up on any idea. Ever. No matter how much it didn’t work. But that, as I’m sure you can guess, is unsustainable.

To save myself from the insanity, I’ve had to learn to prioritise even more; not just making the stories queue up and wait their turn, but actually turning some of them away. It’s been difficult, but my master list of works in progress is finally starting to look manageable.

Don’t get me wrong, it’s still not entirely where I want it to be, but substantial progress has definitely been made. This has taken literal years. I used to have three blogs instead of just this one. When I merged two of them and scrapped the other one entirely, that was a big step. As of right now, I have ideas for three future blog posts. Three is a number I’m comfortable with.

In place of my list of forty-plus poems I wanted to write, I easily have forty poems. The backlog on those is completely cleared to the point that if I get a poem idea, I can write it then and there without wondering to myself if I should finish a different one first.

I currently have seven incomplete short stories and, honestly, three of them could probably be passed on right now and it would be okay. Before, where I had a hard-on for hoarding all of my ideas, I now have an obsession for mental minimalism: striving for the figurative equivalent of ‘inbox zero.’ It sounds counter-intuitive, but the fewer projects I have scrambling around in my brain looking for attention, the more I actually write.

Where I start is with the low hanging fruit and, for me, that will always be fan fiction. I’ve talked extensively here in the past about how I always return to fanfic if other things or stalled or I simply need a creative break. Probably for that reason, that’s where my ideas run most wild.

The stats I have mentioned above for my past unwieldy works in progress don’t include the numbers for my fanfic. For such a long time, I had so many reams upon reams of scribbled ideas, story titles, and unsorted Word documents that I actually could not have accurately put a number on it.

Now, though, I can. Just the other day, I sat down and went through my more recent, carefully-curated sub-folder system and crunched the numbers. These numbers will be a little different from how they show up online, as I’ve posted some stories in separate parts in some places where now, on my computer, those parts have been bound up in a single file with a unifying title, but that’s by-the-by.

All in all, I’ve completed eight pieces of fan fiction outside the Buffy fandom, seventy-one for the Buffy fandom itself, have one I’m actively finishing off and posting all this month, and twenty-five others still to write. Twenty-five still sounds like a lot, because it is, but – as I’ve said – it’s a lot less than the fairly infinite list of projects from before. In fact, in going through my list of WIPs this time around, I found ten ideas that were better suited to being issued as fanfic challenges for other people to take on.

But this is to say nothing of the eighteen fics I have completed that need re-edited and uploaded to Archive of Our Own. Once I’m done with NaNoWriMo, I think that will actually be my next priority just so I can finally tick it off and move on up to some maybe higher hanging fruit.

All of this can be summed up by saying, I’m taking things one step at a time and getting better at not overwhelming myself.

Since I wrote part one of this post, back in May 2016, I’ve written a lot of others about all kinds of projects I’ve finished. For as many ideas as I’m passing on, plenty of others have become realised. I feel so good being able to say that.

This time next year, I want to be able to write a further update saying I’ve finished the Ao3 upload, cut my fanfic works in progress to under ten, and cleared my seven short stories off my desk. In that order.

For next week’s blog post, I’ll come back and get into the specifics of exactly what story ideas I’ve recently laid to rest. Stay tuned for that!