This past weekend was The Society for Children’s Book Writers and Illustrators annual British Isles conference. Having won one of SCBWI’s Margaret Carey scholarships, I got to attend with all expenses paid. And wow, was it one heck of an experience, even if it didn’t quite go to plan.

Having studied in England for University, I’ve travelled back and forth there a lot of times over the years and it was not uncommon at all for me to return with tales of a wacky adventure and/or a war wound. This past weekend was a bit of a return to that.

I should start by saying that, before I even left, I’d been sick for about a week. Really, really sick. To the degree that, I spent most of that week wondering if I was going to make it at all. But I pushed through, packed my bag, and got on a plane.

Minor inconvenience number one (aside from being sick): a short delay taking off. This in itself would barely be worth mentioning if it weren’t the first of many, many things that went awry. How many things can go awry in three days? WELL!

Things kinda started off on the back foot for another reason: I was going entirely broke. Our rent went out the day I set off, the very start of the month, which means our bank account was empty. Over empty, in fact. Even our overdraft was gone. (October was a hard month, you guys.) But anyways, this shouldn’t have been too much of a problem because of the ‘all expenses paid’ bit. My travel was free, my accommodation was free, and of course the conference fee itself was covered. What I also had was £5 on a gift card leftover from my birthday that should work in a long list of places. I double-checked the balance and the list of places before I left, and I planned to get myself a bottle of water in the airport WH Smith once I’d gotten through security. Sounds simple enough, right? Except it didn’t work. Of course it didn’t. The person at the till conjectured it was probably because an airport WH Smith probably doesn’t count as a normal WH Smith.

*deep breath* It was gonna be one of those days.

Whatever. I got my £1.60 bottle of water on our credit card and went on my way.

I don’t know if you guys know this, but I do not travel well. In addition to motion sickness, there’s something wrong with my ears that means they don’t have the ability to ‘pop’ when under the pressure of altitude. This results in two things: me losing what little hearing I have, pretty much as soon as we take off, and me being in extreme pain for the rest of the day as they try and sort themselves out.

Once I landed in Southampton, I got on an overstuffed train for the short ride to Winchester city centre. Thank goodness it was only a short distance because I couldn’t get a seat but, soon enough, I arrived and found my hotel. It was a really lovely hotel. The bed was huge and so, so soft. I was very tempted to lie down and just sleep until I had to fly home again. (I have not mentioned what should naturally be assumed with most of my stories: I had not slept the night before.) But there were more pressing matters, as I soon discovered.

Twenty minutes of fighting with my zip later, it released and I was free to drag myself back out in search of emergency sanitary products. It was dark by this point, and raining, but I found a nearby Boots that was gloriously still open. I found what I needed, took it to the till, tried to use my gift card and– no dice. It still wasn’t for working. Add another £5 to the ever-climbing credit card balance and head on to the next thing: trying to find the venue for my selected ‘Friday Night fringe’ event, a critique session. 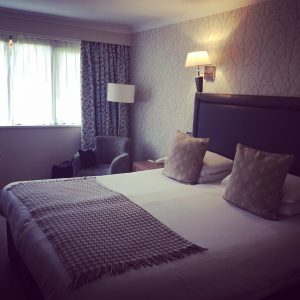 The most direct walking route to the venue (one of the University campuses), I discovered, was through a fairly dark cemetery. Take a second to put that full picture together in your mind: it’s the day after Halloween, I’ve lost my voice, am on my period, and stumbling through a cemetery in dark and rain. I was pretty sure I’d walked into a Buffy fanfic heaving with pathetic fallacy.

I made it to the critique event, which was the main thing, even if I still couldn’t talk and just ended up coughing at all the lovely strangers who tried to introduce themselves to me. We muddled through and went for dinner (chicken supreme, lovely!). Just as soon as I’d gotten it down me (and spilt gravy over my top), I called it a night and headed back through the cemetery towards my comfy hotel bed.

I slept like the dead and, oh, it was brilliant.

The first full day of the conference – Saturday, November 2nd – was due to open at 8.45am with welcome coffee and registration. I woke up at 5am and killed time listening to my Frankenstein audiobook until then, because the lady at the hotel reception told me breakfast started at 8.30. I figured that sounded a bit late and lamented that it cut things a bit tight but whatever.

Imagine my surprise when I slip into the breakfast room at 8.27 to find most people have already eaten and gone. I guess the hotel receptionist was playing a practical joke. Genuinely no idea where she picked eight-thirty from, but it wasn’t reality. No matter. I quickly ate, grabbed my bag, and headed back up the hill through the cemetery.

Given my zip issues of the day before, I had decided not to try closing my jacket again but this was not an option when I saw how heavy the rain was coming down. By the time I completed the fifteen-minute walk to the venue, I was soaked through, head to toe.

I stepped inside the building and took a minute to catch my breath and wipe my glasses. I tried to take my jacket off and, yep, it was stuck. Cue another twenty minutes of me flighting with my zip while I shivered and coughed and genuinely struggled to breathe.

Because of the weather, trains across the whole southern network were heavily delayed. The agent I was supposed to be having my one-to-one with was, therefore, delayed. The long-suffering SCBWI conference team had to reshuffle all the slots. I waited around and got seen, thinking it had probably worked out for the best that the morning ‘breakout session’ I was missing had been fully booked without me. 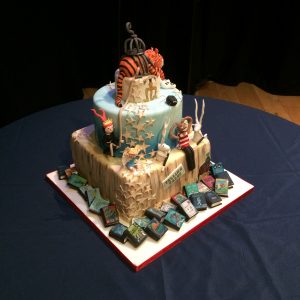 I did make it to opening remarks, the author keynote speech, and the illustrator keynote. I had lunch and I found my room for my chosen afternoon breakout session where we were told the session leaders were, of course, stuck on a train. We could either join another session or wait to see if they turned up.

I headed back to the main building, not wanting to risk being late for what was next on my schedule: The Hook. This event is like Dragon’s Den for writers, and I was one of the contestants. Given everything that had happened thus far, I was terrified I wouldn’t be able to talk and/or would have a coughing fit live on stage, but – mercifully – it all worked out! Huzzah!

The Hook was actually the highlight of the conference for me. I got some really positive feedback and I had a blast. (You can watch my pitch over on my YouTube channel, here.) What followed was a brief interview by Kid Lit TV and a return to my hotel room for a couple of hours and a costume change before the SCBWI Saturday Night party.

Sadly, I was too sick (and too deaf) to stay at the party for very long, but I was there just long enough to get a look at the amazing cake and have a brief chat with a few of the agents that judged The Hook.

Sunday, I am ecstatic to report, all went plan (except for that time I spilt tea all over myself) but I will leave this post on a word of warning: consuming too many cough sweets can have a laxative effect.