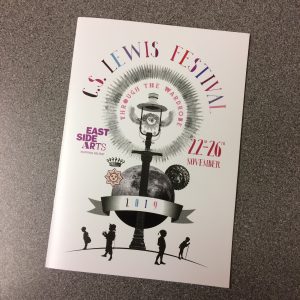 On Saturday the 23rd of November, I’ll be taking part in this year’s C.S. Lewis Festival alongside other Women Aloud NI members. A couple of years ago when I took part, the theme was ‘Surprised by Joy’, for which I wrote the following flash fiction piece. I hope you like it!

It was a terrible, miserable, frozen, windy, brown-grey day; the sky the embodiment of ‘bah humbug.’

Jasper just wanted to sleep through it, but circumstance wouldn’t allow. There were presents to buy, food to arrange, parties to go to, decorations to put up – all the rest.

It wasn’t that he hated Christmas, it was just that he was exhausted and the holiday always poked at him, knowing just where his insecurities lay.

“Haven’t you settled down yet?” one great-aunt or another would invariably ask, only for all the other family members to pile in and spend no less than a half-hour discussing the intricacies of his love life, or lack thereof.

There would be advice – “You’ve just got to put yourself out there, you know?” – and there would be teasing – “Look, Jasper, even the cat has a girlfriend!” – and it would be miserable. All of it.

Jasper had tried to find someone, he really had, but there was nothing for it – no one out there for him. He was alone, and he was lonely. That was just the way things were.

Dragging himself around shop after shop to get everything sorted, Jasper’s mind wondered as his mood lowered still. It took someone calling his name three times before he blinked and looked up, coming back to himself.

There she was. He had to blink again to make sure he was imagining things. Joy Pringle – Jasper’s childhood sweetheart, who had moved away when they were twelve and, in all honesty, he had never gotten over.

Joy smiled at him, the sun rising in her cheeks. “Oh, no. Not now. I’m about to meet some friends for a drink. Do you want to come?”

“Yes,” said Jasper, glad he pulled himself out of bed for such a glorious day.