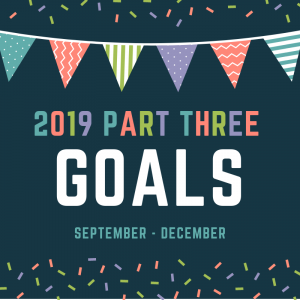 This post is third in a series. You can find part one (covering January to April) here and part two (May to August) here. As outlined in those previous posts, I’m tackling this year in chunks, setting myself goals for four months at a time, rather than having a single set for the whole of 2019.

It seems to be working out.

My only year-long goal – the Goodreads reading challenge – has me sitting at 44 books completed off a total of sixty. That’s 73% complete/4 books ahead of schedule.

Before I get into my goals for the rest of 2019 going forward, let’s take a minute to recap on my summer goals and how well I did (or didn’t) achieve them.

In May, I set myself the following tasks:

From that list, what I didn’t do was lose weight or write a third novel. The number of things I achieved (listed below) definitely outweigh these two failures, which I’m obviously delighted about, but they are still two pretty big failures. Though I will point out that I did take part in Camp NaNoWriMo, as planned, and got a few words towards book three in my trilogy. Overall, I wrote 25,000 words during July, much of it fanfiction works in progress that I wanted to get out of my head at long last.

Here’s the full list of what I actually did achieve:

All this while continuing to deal with a lot of health stuff.

So, where does this leave me? Well, I still really want to sort my weight out but, aside from that, here are my plans between now and new year:

What I will end on is this: I am proud of myself for getting to this point and so damn excited for what’s still to come. It’s probably premature to say this new model of goal-setting is a success, or that this is my most productive year to date, but it certainly feels that way. Stay tuned for more updates!