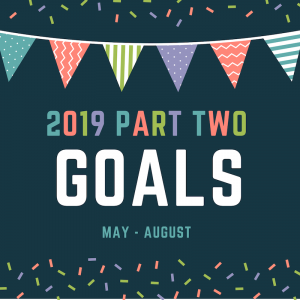 Back in January, I changed things up a little and only set myself one goal for the entire year. That was my 2019 Goodreads challenge to read sixty books. By the time this post goes live, I should have completed twenty-two of those, which means I’m on track.

With regards to other goals, I wanted to focus on things in the shorter term so I decided to plan things a few months at a time and no further. Although it’s not fully accurate, for the sake of simplicity, I’ve split my 2019 into three segments which I’m calling Spring (January to April), Summer (May to August), and Autumn/Winter (September to December).

My Spring was pretty good, all in all. I had my second wedding anniversary in February and my thirtieth birthday in March. I spent a lot of January catching up on all of my accounts for my freelance work so I could get my tax return in before the deadline (which I did!). The rest of that month and part of February was spent doing voluntary work and, when I stepped back from that, I threw myself into decluttering the house following the Kon Mari method.

It felt good to get rid of things and, in the process, simplify my life (simplicity being a big theme of mine, the past few years). The end tally was: 4 bags of clothes (between my husband and I), 1 bag of bedding, 1 [big] bag of books, 8 boxes of komono/miscellaneous items and an untold number of trash bags and recycled things. I also paired down a lot of my social media profiles.

While I was cleaning and tidying, I was on a whole self-improvement kick re-listening to the two Sarah Knight audiobooks I already owned – ‘The Life-Changing Magic of Not Giving a F*ck‘ & ‘Get Your Sh*t Together‘ – as well as her two other “anti-guru” titles, ‘You Do You‘ and ‘Calm the F*ck Down‘.

Would recommend (so long as you don’t take her too seriously and are not offended by excessive use of expletives).

Without a doubt, the biggest thing I had to work on in Spring (particularly during Camp NaNoWriMo in April) was my second novel. I got the first draft done by the end of that month and just sent off to the Arts Council (who were funding me to write it) in the past few days, making it the first thing off my Summer ‘to do’ list already done.

My other goal for Spring was to lose weight, which I did. I almost lost the full stone I was hoping for, then stress and my birthday happened and I pretty much put it all back on. That’s something I want to get back on track during this new season, definitely.

Other goals for Summer include (but are not limited to):

I definitely have set myself more goals for Summer than I had in Spring, but there’s less pressure because of no longer having a book deadline and fewer time constraints because I’m not doing a lot of my previous voluntary work anymore. I guess we’ll see how it works out.