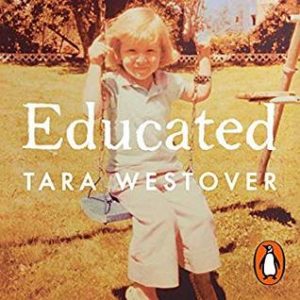 I have just finished listening to the audiobook of Educated by Tara Westover. Once I started, I found myself taken over; not able to do anything else until I got to the end. It’s twelve hours long and I finished it in a day.

For those who aren’t familiar with the book, it’s a memoir: a personal account of an unconventional and abusive childhood alongside the story of how, as an adult, Tara came to terms with what happened and escaped the life of her family via going to college and getting an education.

This blog post isn’t about the book, as such. I gave it five stars on Goodreads and wrote a sentence-long review in which I said I had a hard time summing up my thoughts and feelings about the book, but that I knew it was important. The reasons I can’t sum up my thoughts and feelings is partially because I have so many of them and partially because those thoughts and feelings are tied to my own experiences of childhood. While my experiences and Tara’s differ in circumstances and severity, so much of it is similar. Someday, I plan to write a book about my own set of circumstances growing up. I have a title picked out, and an epigraph. I have started certain sections, but I am by no means ready or able to unpack much of it even yet.

This post isn’t about the book or my experiences, or a comparison of the two. That’s just a preface to what I want to say about some of the negative reviews Educated has on its Goodreads page.

Now, for the most part, the book has had an extremely positive reception. The negative reviews are few and far between. I probably shouldn’t focus on them, but it physically hurt me to read them and I need to talk about why.

These reviews were not full of insults, they were full of confusion and questions. They doubted the reality of the account.

Tara bore her soul in print, explaining deeply personal details, often in extreme detail, and the reaction of some people is not to believe. That makes me want to cry in frustration.

The top question on the Goodreads page is, “how is this possible?” and the answer someone else gave was, “Unless you have been raised in a closed, fundamentalist system… you have no idea of the level of brainwashing, gaslighting, emotional abuse that goes on.” Which is true, and it’s both a good thing and a bad thing, if you ask me. I wish no one had an idea of what it was like. I wish no one had to. But because such things can and do happen, we – which is to say, the rest of humanity – need to know about it.

I know it must be hard to get your head around the fucked up things that some people have experienced. It’s hard even for those of us who have lived it first-hand. But just because you can’t comprehend something does not mean you should dismiss it out of hand. That makes you part of the problem.

Here is a direct quote from another review: “I needed some light moments in the midst of all these horrible childhood memories. Even in the worst of childhoods there are some bright spots. For me this book had a very positive message, however I would’ve preferred it to be delivered in a more positive and realistic manner.”

Let me repeat that: “Even in the worst of childhoods there are some bright spots.”

Words cannot express how much this boils my blood. What an arrogant, privileged assumption. This reviewer read an account that entirely goes against their assumption, and they decide that it’s the account that must be inaccurate, not said assumption.

They would have “preferred” someone’s life story about the abuse they suffered to be more “positive.” They “needed” the story to be lighter, and more “realistic” because it didn’t match their reality.

A third reviewer questioned how the abuse hadn’t been discovered at various points during Tara’s childhood. “If indeed these things were happening, where were the people who should have noticed the abuse? Where were the friends, the churchgoers, the people who did business with the father? Would they have not noticed untoward things happening to the Westover children? Would not at least one of them have come forward? Why are some of them coming forward now to defend this family?”

If indeed these things were happening…

Dear Reviewer, the answer to your questions is simple. I would bet my life that people did notice the abuse. Those people, as yourself, dismissed what they saw and heard, because it’s unpalatable. Why wouldn’t they have come forward? Because assholes like yourself never fucking listen or believe.