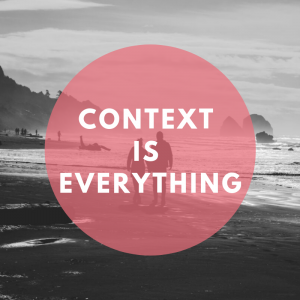 Living with my parents sounds like a more clear-cut thing. Yes, my existence there was rent-free. In some ways, that gave me financial freedom. But not when you understand what a toxic, neglectful, and downright abusive environment that place was. Most weeks, I had £10 to live on. Ten pounds to call my own after I paid the minimum amount off my credit card and student overdraft. An overdraft I was privileged to get in the first place, get disadvantaged enough to need.

With my £10, I was in no position to have savings. I couldn’t gather together a deposit and first month’s rent for a place while I applied for housing benefit and waited for it to kick in and pay the rest. Before I met my now-husband, I was entirely trapped.

When I read back over my previous post, I worried about how some of the facts I’ve now pulled out and looked at more closely here might initially appear on the surface. I want people to read my posts and get a clearer understanding of my situation, not be left with false impressions based on ill-explained points made in a throw-away manner.

Intersectionality is very much a thing.

Like, I’m a white person living in the western world. I can “pass” for straight and I can “pass” for able-bodied. Each of those factors come with their own set of privileges. Yet, at the same time, I have clear disadvantages. Because, despite how it might appear, I’m not straight and I do have disabilities. On a more basic level, as a woman, I’m less likely to get the same opportunities or pay as a man in the same situation.

Class divides are their own minefield. Both of my parents grew up relatively poor. They would have been considered working-class, but now they’re doing alright. Quite well off, all considered. These days, they’d probably be considered middle-class. What does that make me? I have the education of a middle-class person, but I do not benefit from my parent’s money. I live in a small, terraced house in a somewhat deprived area. I live on welfare, as I’ve already discussed.

I want to clarify, just in case it’s not already clear, that this isn’t me trying to present a sob sorry. I’m not feeling sorry for myself and I’m not asking you, as a reader, to pity me. I want to present you with my life and I want you to understand me.

My life is complex and full of contradictions.

I ask you not to judge me for it.