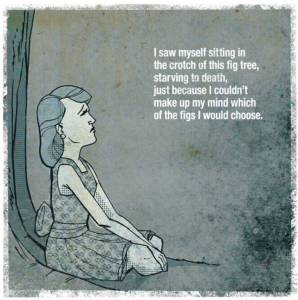 Sylvia Plath was thirty-years-old when she died. This is a sobering fact I have only just learned, having googled her to directly reference her fig tree analogy.

When I lie awake at night, I often think of the fig tree she described in the Bell Jar. Of all of the opportunities and the paralysing fear over picking one of them.

Somewhat fittingly, I have started to write this post several times, each with a different slant, only to scrap my words and start again. I almost scrapped the idea in its entirety, worried that not being able to select and follow a narrative was a sign that the whole thing wasn’t going to work.

Here’s a fun fact: life has many narratives. That’s the whole point!

I always felt like the fig tree analogy spoke to a deeper truth but from my perspective now, as a thirty-year-old myself, I actually feel there’s a lie at the core of it: “Choosing one meant losing all the rest.”

Choosing means choosing and nothing more. You can change direction down the road.

Changing direction can be the best thing ever.

Turning down one opportunity might mean it is gone and will never be open to you again but for every turn-off you miss, there is a literal infinite number of others and THAT’S OKAY. In many cases, that’s actually fantastic. Revel in the freedom of this knowledge.

Missed opportunities are not the end of the world, friend. I wish to god someone had sat me down ten years ago and told me that.

Ten years ago, I tortured myself in trying to decide what to do with my life. I knew my university course wasn’t working out; that I had picked the wrong path. What I didn’t know was what the right path was, much less how to get onto it. Looking back on it now, it all seems so melodramatic, but I genuinely thought I had ruined everything. EVERY SINGLE THING EVER. But I was only twenty. Twenty is so young. Hell, most forty-year-olds still have most of their lives still in front of them these days.

I wanted everything – to be an author and an artist and an academic. I wanted to travel. To settle down but not be tied down. To be independent and also have children and pets relying on me. All of this left me feeling ill. Indecision over it indeed left me precisely nowhere. How could I possibly have it all?

Well, the key as I discovered, is that I (A) didn’t really need all that to be happy and (B) it actually was possible to engage in many opposing things because there was no requirement to do them all at the same time.

You can have your cake and eat it, just not simultaneously. Knock yourself out and put it on a display platter for a while. Stare at it. Salivate over it. Then eat it.

Then you can always buy some more. Did you ever think of that?

Do you ever find yourself standing in the treat aisle, torn between crisps and chocolate? You want both but won’t allow yourself to indulge quite that much. After much deliberation, you go for the option you always choose because it’s somehow mentally easier to do the thing you’ve always done.

If I might suggest something radical: put zero thought into the decision at all, knowing that whatever you buy today you can get the opposite of tomorrow. Then get the other option tomorrow. Go on, do it! What are you actually scared of?

I am trivialising things here on purpose because, in the grand scheme of things, so little of this stuff actually matters. If you bought both the chocolate AND the crips, the world wouldn’t end.

This advice goes out to my past self as well as anyone else listening along:

I once heard someone say that the career ladder is less like a ladder and actually more of a jungle gym. This has always stuck with me. There is not a single way to the top and the top might not actually be where you want to end up, anyway. You can jump from one part to another. You can go from climbing to sliding. YOU CAN FALL and it will all be okay.

My number one piece of advice for life? Just bloody well live it already – in any and all of the ways you see fit – and do not, for the love of god, sit starving under an effing fig tree.