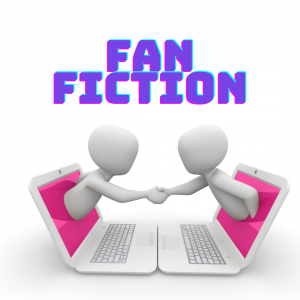 I’m having mentoring with Jo Zebedee at the minute (courtesy of funding from the University of Atypical), and in our most recent check-in I caught her up on what I’ve been writing recently. Which is––some of you who know me well will be unsurprised––primarily fan fiction.

When I said this, I wasn’t sure if Jo was going to wag her finger and tell me I should be working the sequel to Full Term (which I’d initially scheduled for this month). But of course Jo is lovely and not at all finger-waggy, so I think the mild fear came from my own subconscious.

I told Jo I felt a little guilty for writing fanfic instead of “original” fiction, but when she asked why, I found the answer hard to pin down.

“I just generally always feel guilt,” I said, which is true, but in this specific case I also think it’s because fanfic is looked down upon in some circles. As ‘not real’ writing. As cheating. And no matter that I know that’s nonsense intellectually, I’m not immune to feeling chastised by such opinions.

So why am I working on fanfic instead of my novel this month? Because this month has been hard, and I find fan fiction easier in a lot of ways than “original” fiction. I needed something easier––something that would make me happy without taxing my already overworked brain too much. Also because despite my self-appointed schedule, I have almost a year to write Life Lessons. It’s not like I’ve set up pre-orders, have the book coming out in under thirty days, and still haven’t written the damn thing.

So it’s fine. I need to chill. Which is, in fact, what I’ve been doing. And although I just went ahead and did it anyway, I don’t need to justify the writing of fan fiction. Any and all writing that gets done is a good thing. And I’m actually having my best writing month ever. I signed up to do 50,000 words for this round of Camp NaNoWriMo and I’m over halfway there.

But here’s the other thing Jo asked me: if writing fanfic is a big passion for me and I put all this time and effort into it, why don’t I talk about it more? That one had me stumped a little, because I’d been under the impression I talk about it too much. Though in going back through old posts, I can see the last time I made one about fan fiction specifically, it was almost two years ago.

I used to do yearly posts, collating stats on the anniversary of when I started writing fic, but skipped 2020 because, well… we all know there were some other things going on. But a main yearly post and vague mentions elsewhere do not indeed constitute talking about something a ‘lot,’ so I’m back to thinking that was my irrational guilt talking. An internalised sense of shame that I talk about it at all. I know some published authors have fanfic writing pasts that they think of as dirty little secrets, but that’s not me and will never be me.

So this internalised sense of shame acknowledged and unceremoniously shown the door, I next wondered if the topic was moot. If anyone outside my existing fanfic circles wanted to hear about it. I had assumed no, but Jo challenged that assumption, so I decided to put up a Twitter poll and get the actual answer…

And so, here I am, sharing these thoughts. And later this month, on the anniversary of when I first started writing fanfic (28th July), I think I resurrect the tradition of posting my yearly stats.

In the meantime, if you are one of the people who fell into the curious category, you can find my stories free to read online here: https://archiveofourown.org/users/EllieRose101

One thought on “Just FanFic Thoughts”