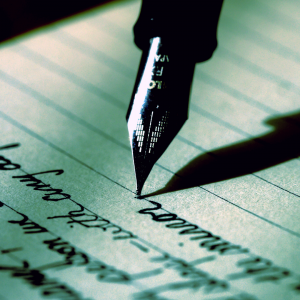 Sometimes things that should be perfectly obvious manage to, somehow, evade our notice. In terms of my writing – something you would expect I’d know quite a bit about – I have encountered two such examples. Two facts that surprised me that really shouldn’t have.

In the first instance, I was talking to some of my writing friends the other day about how it wasn’t until maybe a year after I finished the first draft of my novel (Full Term) before I realised it is, in essence, a baby fic.

For those unfamiliar with the term, it mostly floats around in fanfiction circles and just means, as the name suggests, a story primarily featuring a pregnancy and/or baby.

Now, obviously I knew there was a pregnancy in my novel – it is indeed the hook of the story – it was just that I hadn’t put two and two together and thought of my novel in those specific terms. Probably because it’s a fanfic term and the novel isn’t fan fiction. But here’s the really interesting part: when I finally made the realisation, I was embarrassed.

I really believe in Full Term and the story it tells. I’m really happy with how it’s turned out, and I’m excited to see where it will end up published. None of that has changed but, in the moment I attached the ‘baby fic’ label to it in my head, it suddenly felt foolish.

It took me a second moment to figure out why, and a third to dismiss the embarrassment as the truly foolish thing. Because what it boils down to is basically snobbery, and snobbery has no place in literature, if you ask me. But let me back up for a second and unpack that a little.

You see, some people classify novels into two main groups: literary fiction and genre fiction. These same people often tend to laud the former while dismissing the latter.

Genre fiction, if you don’t already know, is any book which can be easily classified as fitting into a, well… genre. Whether it is science fiction, fantasy, historical, mystery/thriller, or whatever else. Literary fiction, conversely, is hard to pin down.

I am of course generalising here but, within the realms of genre fiction, some genres are appreciated more than others. As with anything, there are stereotypes, and those stereotypes often have a root in truth but are far from giving an accurate representation of the thing as a whole. For example, historical fiction is often considered legitimate on the one hand, but boring or difficult to read on the other. I’m not saying either of these things are right (because I don’t personally believe they are), but you get the idea.

To give another example, I know Jo Zebedee is perpetually infuriated by people who dismiss sci-fi out of hand without properly giving it a chance.

But even some people enlightened enough not to turn up their nose at books that have the audacity to be easily placed in a bookshop would laugh at the idea of delving into a third kind of fiction. No, I’m not talking about short stories, though I’m sure some people don’t indeed consider them worthy of their attention. I’m talking about fan fiction.

I am not going to write an essay here defending the legitimacy of fan fiction, mainly for the fact that such defences already exist and are wonderful (I know this because I’ve read them. Linked above is a previous stab I had at the matter, which links to an even better source at the bottom). I want to take you further, to the real point I am reaching: which is, within fan fiction – yes, even within the generally very varied and accepting sub-culture – there are further categories of stories and tropes that are regularly not taken as seriously. And baby fics, as you might have guessed, is one such category/story trope.

I read baby fics and I enjoy baby fics with no shame but, despite this, it appears I had internalised some of the ill-feeling towards them because as soon as I thought of my novel as belonging to that category, I felt that aforementioned embarrassment. Which just goes to show how duplicitous the human brain could be. If a friend of mine told me they were writing a baby fic, I would be excited. So it was clearly nonsense for me to feel foolish for working on one myself. Hence my throwing off of the embarrassment once I’d identified it and traced the source.

As for my second realisation, it’s bigger but not altogether different. It is this: I just might, in fact, be a romance novelist.

‘Wait,’ you might be saying, ‘don’t you always market yourself as a young adult author?’

Well, yes, dear reader, I do. Except the wonderful Leena Norms made a YouTube video* a long while back talking about how YA is a category rather than a true genre. And having watched that video, I realised she was (and is) right. Because a novel being YA just tells you the target age range. It’ll also fall into a genre completely outside of that (unless it’s ‘literary’).

Which is to say you can have a YA novel that is a comedy, a YA novel that is also historical, YA Sci-Fi, or whatever other combination you can imagine. That’s not even getting into the topic of novels that cross-genre, or are considered ‘crossover’ in terms of target readership (from young adult to adult).

As you will see, it can all get very complicated. So let’s step back from the generalisations again for a second and talk about my writing specifically for another moment.

One genre I haven’t mentioned in this post in great detail is romance, and that’s because I was waiting to give it its own personal spotlight here, at the end. Romance novels are A, the most popular genre worldwide by a country mile and B, also one of the most looked down upon. This is primarily a gender bias issue, as they are mostly read by women and – as uncomfortable as this fact may make you – a great number of people (including a not insubstantial number of actual women) will think of anything targeted and/or enjoyed by women as lesser. Less important, less well written, less worthy of time or respect. It’s sexism, pure and simple. Another brand of snobbery.

And so, when I realised that what most of my novels have in common outside of being for (primarily) young adults is having a love story at the core, I cringed internally. For try as I might to embrace feminism in every aspect of my life, sexism is insidious enough to internalise itself anyway.

I’m not talking about simple matters of preference here, complaining that not everyone likes every single book under the sun. And I’m not singling any person or group of people out to have a go at. If you, or your friends, laugh about a certain type of book there is little I can do to stop you or convince you otherwise. I’m just here assessing my own opinions about my own books, both the ones I read and the ones I write and I find it interesting when I find a disconnect such as the two I have mentioned above.

Please let me know if any of you, reading this, have had any similar realisations about your own work in the comment section below. I hope you’re all keeping safe and well. Thank you for reading.

*Said video not linked because I’ve spent most of the morning looking, but I just can’t find the damn thing. You’ll have to take my word for it. Or tweet Leena, if you’re very interested. I swear I didn’t make it up.