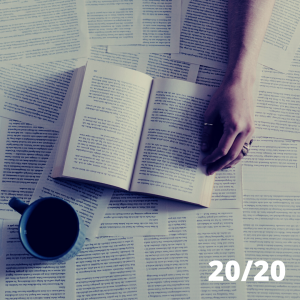 It is Monday morning. A new day, a fresh week. I am, as the title of this post suggests, refocusing.

I had been thinking I would write a post today titled ‘On Disappointment and Uncertainty,’ because that’s the one I had planned. It’s what I wanted to write last month but didn’t have the brainpower for. Because disappointed and uncertain was where my head was at for pretty much all of August.

I’ve already said I found August particularly hard, and that part of that was moving, but that doesn’t really paint a full picture of everything that was going on.

Before we got to the huge physical strain that moving was, there was applying for houses. And that was the emotional strain, because it seemed no one wanted to accept our application.

Waiting for landlord decisions is tough, in and of itself (especially when the answer comes back as no and you have to start all over again), but what that waiting coincided with for me was also waiting for responses from agents and publishers, waiting for a funding decision, and waiting for my A Level result. (I feel like there was something else in that list, too, but I’ve lost track of whatever it was at this point.)

Well, I got an okay result. A grade C. Not exactly what I wanted, but not awful. And we found a house and moved in. There are some loose ends still to tie up the end of the moving process, but for the most part that is done. Huge, huge relief!

I found the uncertainty over these things legitimately debilitating. Hence my hiatus from writing. And reading. And posting here.

I’m still waiting on the funding decision – it ended up being pushed back until October – and I haven’t heard from the majority of agents and publishers I submitted to, but I’m not particularly stressing about that. Why? Because I have a plan. I almost always have not just one single plan, but a main plan and lots of smaller, sub-plans. I think that’s what made all the uncertainty hardest for me – all of the things being out of my hands. But going forward – recentering my focus on the future – not everything seems so dire.

I’ve had a poem accepted that I think is being published next month, in October. I have a short story due to be published in November. November is National Novel Writing Month (NaNoWriMo), and I plan to be finishing the third book in my trilogy. As of this past weekend, I am writing again. I am reading again. I have an active list of reading and writing things to work through that is A. not crushing me under the weight of it, and B. not a list of physical tasks I must complete before even considering taking to my computer for words.

In under two weeks, I am handing back the keys to the old house. By that time, the minor work that needs done there will be wrapped up. It will have been cleaned within an inch of its life (several times over). I will have finished updating our address everywhere. Puzzle pieces will have slotted together and our payments will be all in order.

Things are coming together.