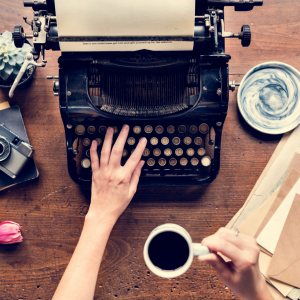 For some people, writing is an endurance sport. They wait around for inspiration to strike, then labour over the words, writing and rewriting and editing.

I’m not someone who’s ever really experienced writer’s block. I practically have ideas queuing up, yelling at me to hurry up and put them in order. Drafts also don’t tend to take a long time for me, once I get past the nonsense of procrastination.

Regardless of how long the writing takes, though, I think it’s getting published where the real work is. Being the best writer in the world won’t prepare you for it. It’s a whole different ball game and takes a whole different set of skills.

One of the notes I took during the agent panel simply said, “Don’t rush.”

One of the agents elaborated on this saying, (and I’m paraphrasing here) it can take years to write a book, don’t get to the end of that and then screw up its chances by only putting five minutes effort into submitting it.

I needed to hear that. I get way too caught up thinking (and worrying) about time and how there’s not enough and everything takes too long. Part of the conference touched on the process of publishing. I’m going to write another post about the day more generally but, for now, it’s important to note the use of the word process. It’s not a one-time event.

We, as writers need to be thinking not just about our book, but about our career as an author. It’s more than one book. It’s the thing that (if done right) lasts. A publisher might contract you to one, two, or even three books, but agents are looking to build a longer-term working relationship.

The submission process (there’s that word again!) can be intense. I think I needed a brief step away from it, and that weekend was it.

Previously on this blog, I’ve outlined my writing journey and how long it’s taken me to get to this point. I reflected on the fact that it needed to take all those years, but also that if I had known getting an agent was so long in coming, I probably would have gotten disheartened and given up.

I’m glad I didn’t give up, but only because I now feel so close to my dream. I feel ready for the next step in a way I never have before.

Not long after I wrote that post and had those thoughts, I read a piece by someone else. This writer said they’d been submitting to agents for ten years. They put a positive spin on it and said that others had been encouraged by the post. It made them feel not alone. It helped them want to carry on.

It made me want to cry.

Honestly, I don’t know if I’d have the strength to put myself out there for so long with no success. I stressed about this for a while before I finally had to put it aside. I may never come to that bridge, let alone have to cross it. I can’t let fear of what might be in the far distance hold me back.

Panicking is counterproductive. Panic is what makes you rush and mess up and make everything take that much longer.

You might be in this for the long haul, but that doesn’t mean you want to keep giving yourself false starts that delay you getting out of the starting blocks.

Metaphors aside, in preparing to write this post, I discovered that I’ve previously tackled it from the other side. This time last year, I wrote a post about impatience and self-publishing and how it didn’t work out so well for me because – surprise, surprise – I rushed it.

At the conference, one guy asked, “how long do you submit a book [to agents] with no success before you turn to self-publishing?” This is something I’d been wondering myself. I think the guy was left feeling quite frustrated, because the panel couldn’t give him a definitive answer.

How long is a piece of string?

I don’t know in terms of numbers, but what I have learned is, it’s the length it needs to be. It takes as long as it takes.

There is no need to panic. No need to rush.