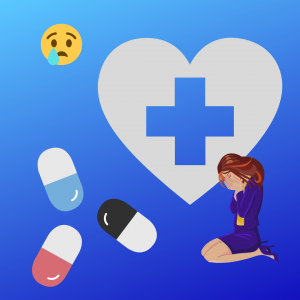 I’m gonna start this post, right off the bat, by saying I am in full support of the UK’s National Health Service and all they do. It’s a crime (or at least it bloody well should be) the way it’s been systematically underfunded for years, leaving waiting lists ridiculously high and people, quite frankly, fucked.

Today’s post is a personal one, because today, I am one of the people being fucked over.

I need to rant and vent, but I don’t want anyone to get the wrong idea. The problem isn’t truly the NHS, it’s those bastards in parliament trying (and in many cases succeeding) to gut it.

Disclaimer made, let me now rewind to explain why I’m upset.

I’m just off the phone with Occupational Therapy, who have told me – in essence – that they can’t help me. I had gone to my GP about a long-standing issue I had, seeking her advice for the best way to go about getting officially diagnosed and accessing help.

She told me I needed to self-refer to O.T.

Now that I’ve tried that and gotten nowhere, I am – precisely – nowhere with zero clue of what to do next.

O.T. confirmed that they would indeed have been the people to talk to had I still been a child who presented with these issues. But there is nothing in place for adults trying to get help for themselves without that diagnosis in childhood.

Which all goes to say, I am feeling very fucking frustrated.

‘Why weren’t these things flagged when you were a child?’ I’m being asked.

Why indeed, I want to scream.

From my perspective now, looking back, I can see clear instances of the red flags flying but no one paying a damn bit of attention.

Partially, it’s not my parents’ and school teachers’ faults  – but only partially. They probably didn’t know much, if anything, about the conditions I have, but I can’t help but feel like somebody somewhere should have realized I had legitimate issues – even if they didn’t know what they were, or what caused them – and got a note made or asked an expert.

If you’re anything like me, you will see friends and family sharing posts “raising awareness” about various conditions, syndromes, and illnesses. This is vitally important, in my book. As an adult, these posts have taught me so much.

It’s an incredible feeling to read something that so perfectly describes a problem you’ve had you’re whole life and tell you what it is, in definitive terms. These lightbulb moments have left me in tears more than once. They tell me I haven’t just been imagining things, or been stupid, or lazy, or whatever other labels I’d been assigned rather than the right one.

Awareness, once found, tells us we’re not alone.

But what then? What happens if you’ve had the aha moment, finally realized the root of your issues and now want to do something about it?

For me, the logical step was to talk to my doctor. Because as far as I see it, there’s no point in realizing you have an issue unless you then follow the steps to get said issue officially recognised and managed. And I know that self-diagnoses from the internet has pitfalls. Of course it does. A twenty-minute search on Google does not a doctorate equate.

But what if that’s all you’re left with when your doctor – pushed for time and resources – doesn’t take you seriously?

Generally speaking, my GP is amazing. She’s helped me with a whole bunch of everyday medical concerns, from infections to infertility referrals, but she has dropped the ball on this one. I went to her with a number of questions about a few different conditions it is now clear to me that I have and I left with a note to call Occupational Therapy with regards to one issue and advice to just learn to deal with the rest.

Having had to ‘make do’ up to this point, constantly struggling to live a normal everyday life, I’m sure you can imagine I’m not too happy about being dismissed. Again.

Again, I will ask, what do you do when you realize you have an issue, that you need help, but can’t find it?

Dear reader, these are not rhetorical questions. If this resonates with anyone, please, please let me know.