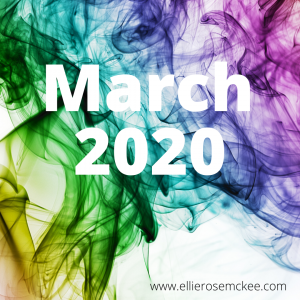 It’s been a while since I updated this blog with reading and writerly things, so I’m here today to fix that.

I got a lot of words in February – 28,997 in 29 days, to be exact. And for the most part, the momentum seems to be carrying over until March. Long may it last!

27th of February I had a short story published by Visitant Lit. It’s called Earworms, is a horror/fantasy piece, and might not be suitable for overly squeamish readers. Read at your own discretion. (Apparently I gave my beta reader nightmares.)

Going forward, I’m going to have a piece published in volume two of The Bramley – the literary journal of Flash Fiction Armagh. I’m even getting paid, which is a first! It’s only a token fee but, even so, it feels like a milestone.

The short story I had published online in August last year will be coming out in print in April 2020.

And, in other news, I’m doing a little bit of client work at the minute, and Belfast Writers’ Group things are moving forward again. We hope to have the third anthology out this summer.

I’m due to read a selection of my work at The Secret Bookshelf at the Courtyard, Carrickfergus for World Poetry Day on Saturday 21st March. It’s a bit of a ‘pop up’ event, but I believe I’ll be ‘on’ at 1pm (maybe 1.30) I’ll confirm on social media closer to the time.

Camp NaNoWriMo April: I am all signed up and planning to redraft an existing work-in-progress ‘Death Girl.’ (Previously titled Born of Death.) At this stage, I have most of the main plot points but don’t know if it’ll turn out to be a full-length novel or more of a novella.

April is also challenge month for the fan fiction site I’m part of, so I’ll be writing a story for them, too.

That’s everything for now! (I think.)