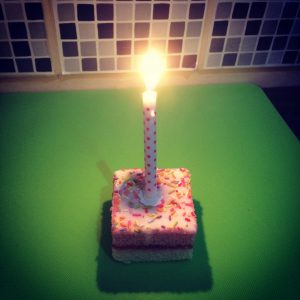 Tomorrow is the one year anniversary of lockdown starting in the UK.

It’s also my thirty-second birthday. Meaning I’ll be one of the first people to have two birthdays spent in lockdown.

Surprisingly, I’m not feeling too bad about it. Maybe because all the excitement going on with my book release is outweighing the disappointment of not being able to celebrate with friends, or maybe because I know that––comparatively––I’m not in too bad of a position.

All considered, I’ve been fairly unscathed by the pandemic. I’m not saying it’s been easy, but I’m aware of my privilege in not having lost anyone close, when for so many others it’s been so much worse.

Back when the pandemic started, my mental health took a nosedive for a couple of months, as I know was the case for a lot of people. And for a bunch of those people, their mental health hasn’t yet recovered. For more still, the emotional impact was compounded by the fresh wave of injustices that happened during the Black Lives Matters protests last summer. And even more recently than that, the unrest over racism against Asian communities in the states, and women in the UK.

Overall, it’s been a hard year. But I don’t need to tell anyone that.

I hope this doesn’t come across as insensitive, because that’s absolutely not what I’m going for here––my heart goes out to everyone who has suffered over the past twelve months. But with everything that’s happened, I also feel personally grateful to have made it through.

I got my first vaccine on Saturday, and I’m hopeful that, soon enough, I’ll be able to see friends again. (Soon being a relative term.)

Trite as it might sound, the hard times will end. We’ve got to hold on to each other now more than ever, in this home stretch. We’re not out of the woods yet, but there’s light at the end of the tunnel and––I’m sorry, that’s a lot of mixed metaphors. What I just wanted to say is I’m feeling hopeful, and I hope that’s okay.