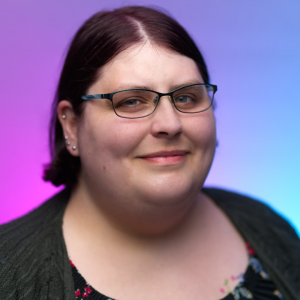 Given the extreme amount of societal pressure on women to look good, in a world where the definition of ‘good’ is ever-changing, and often contradictory––where beauty standards demand you look attractive, but not too attractive, lest you bring any negative attention you might receive down on your own head (because you had to be “asking for it, looking like that!”)… Given all that? It’s fair to say even looking at yourself in the mirror each morning can be a minefield.

What, then, is one to do when you’ve chosen to follow a career path in which an online presence is expected? One where you’re expected to be on at least three different social media platforms, to post semi-regularly on each, and create some kind of consistent ‘brand’ across them?

Specifically, what do you do when you hate how you look, you hate people looking at you, and find yourself in need of professional headshots?

This, folks, is the dilemma I recently faced. Luckily for me, though, I had a big thing in my favour, for I’ve had the pleasure of getting to know a professional portrait photographer over the past year.
In July 2021, I signed up for a beginner’s photography class through Strand Arts Centre, and for six weeks I learned about how best to use my camera, but mostly how the camera wasn’t even the important thing, so long as you’re getting shots that make you happy.

Well, I was happy. I enjoyed the sessions so much, in fact, that I went on to complete the continuation course via Zoom this past winter.

I’m sure a lot of the people reading this who know me personally are aware I’ve been really getting into visual art over this past year, too. And when it came to seeking out an illustrating mentor, I discovered that my photography teacher has a background in painting and drawing! (Among what feels like seventeen thousand other skills. You know the kind of people who seem to be good at everything? That’s Mathieu!)

Well, anyway, I worked with my photography teacher to improve my art, and we got talking. One of the very first questions I asked him was about headshots, and how much such things cost. Turns out, good ones? Not so cheap.

I put the thought on the backburner for a while, pondering it now and again, but I knew I’d have to bite the bullet sooner or later (if you’ll forgive the mixed metaphor).

Bottom line was, headshots would help boost my online presence. Good ones would make me look more professional, likely get me taken more seriously, and might even help boost my confidence.

Needless to say, that last one was the real kicker.

Primarily, I’m a writer by trade, so I hope it speaks volumes when I say I find it hard to put into words how much I don’t like looking at my face. Even with knowing Mathieu for near a year, I was nervous at the prospect of letting him photograph me even from just the neck up. And it feels silly typing that! There’s all the aforementioned societal pressure about how to look, and then there’s judgement heaped on top if you get too caught up in feeling bad about it. Or even if you feel good about it. A woman truly can’t win! But I’ve likely ranted enough. The point is that I:

A. agreed to a shoot

And B. was bleeding terrified.

Having done this for (at a guess) hundreds (maybe thousands?) of people over several years, Mathieu understands. We talked through my concerns, and we set a date. Was I still bricking it when he picked me up at Lisburn train station? Yes. Did I want to run away the moment I stepped inside his studio? 100%.

Again, I feel foolish for feeling that way, let alone admitting it on the internet, but as followers of this blog will know by now, I keep things honest here as best I can.

And here I am, a week and half later, with the resulting photos on my computer and the experience in hand. I had many more thoughts and feelings when I first saw the photos, which I’ll get into in a minute, but first you’ll want to know how I got through the actual session itself.

Honest answer? One step at a time, one photo at a time, chatting as casually as I could all the while.

To return to an earlier point, a good portrait photographer knows that the camera is not the important thing in this situation, it’s the person in front of it. You’ve got to put them at ease. Make them feel comfortable. Make them laugh, if you can. And this is yet another area in which Mathieu excels.

You go in for a photoshoot, but most of the time is actually spent having a chat. Getting you settled in and calmed down so that when he finally clicks the shutter button, you look happy.

During the two hours I was in the studio, I actually learned something fairly startling about myself––a realisation I really didn’t expect: that my chronic pain is actually a lot worse than I ever realised.

At home, I’m in constant motion. Forever shifting in my seat and rearranging my arms and legs if not altogether getting up and doing some menial task or other in between each desk-based activity. I move without thinking, every other moment, all of the time. I don’t even properly settle in my sleep. I’ve known this for a long while. But what I hadn’t realised until I had to pose for photos is that it’s actually a coping mechanism. That if I’m not moving, I’m in active pain.

At the start of my photoshoot, Mathieu had me sitting. And within five minutes, I was in agony. So I stood and yes, had to move around. Standing was more comfortable, but even then I had to fight pins and needles in my legs every five minutes. I told Mathieu this, and he was understanding. He was super accommodating, moving his lights and other equipment to suit me. Which is all to say, I’m really thankful I had such a good photographer.

By the end of the session, I was okay. The nerves had passed and I could relax. I went home feeling generally positive about the whole experience.

It was two days later that I got the first photo––the one I’ve included at the top of this post––and I liked it. It was exactly what I wanted, and what I needed, so I gave Mathieu the go ahead to pick out a few more winners from the shoot and prep them for me to look at, too.

The next day, I had three more shots in my inbox, and it was here that my insecurities returned with force. It wasn’t that any of the new photos were objectively bad––if I ignored my gut reaction and tried to look at them logically, I was actually pretty sure they’d be even better received than the one I had already approved. But I still had to parse the tangled web of conflicted dissonance between what I knew and what I felt.

To this end, Mathieu asked me to try something. In preparation for the shoot, he’d conducted a small survey, asking me who I trusted most and who knew me best. I then had to ask this person (my husband) what my best traits (physical and in terms of personality) were. This helped inform Mathieu which aspects to focus on while in studio. And now, he asked me to take the four photos, show them to my husband, and get his opinion.

Now, because I know my husband as well as he knows me, and because I was also aware objectively that the photos in question were good, I could have put money on how this was going to go. Mathieu did, too, which is of course why he got me to do it.

So I humoured him, and I showed my hubby the photos.

To the surprise of absolutely no one, he loved them. Particularly the one I was most nervous about, in which I was most myself, most smile-y and happy and least guarded.

I spent a long time looking at the photo, listening to a pep talk from my husband alongside calm, rational reasons from Mathieu as to why, objectively, the photo with the big smile was my best one. And it started to work. The photo grew on me. I took the next step of showing some close friends, who were also positive.

At one point, I spent so long debating back and forth over it that I changed my mind back again. I looked at this one photo so hard I’d gone from hating it, to liking it, to hating it again. But the conclusion I came to in the end was that I was never going to be truly confident in my physical appearance, but you know what? I didn’t have to be. I just needed to trust the people I know and love, and lean on their confidence where my own was lacking.

I wish I could round off this post with some grand secret to being able to look at yourself and truly see how wonderful you are inside, but if I could do that, I would be a billionaire and not in my living room writing this blog post.

Here is my genuine advice to anyone wanting a good photo, even if you don’t like how you look: find a good photographer. One who will talk your insecurities through with you, and reassure you it’s normal. Someone who will put you at ease, and make sure you’re satisfied with the outcome. Someone who cares about you having a positive experience.

If you’re local to Northern Ireland, I sincerely recommend hiring Mathieu Decodts. You can find more information, including how to contact him, via his website here: www.mathieudecodtsphotography.com

One thought on “Confidence Tips for the Painfully Shy”